Everything I Learned About Entrepreneurship, I Learned from a Little White Dress

Running your own business is certainly an adventure. Earlier this month, my firm celebrated its second anniversary – Happy Birthday, dear Impact! – and, believe me, I’ve learned many valuable lessons along the way. One of the best can be summarized with a story I shared with the Unique Ladies of the Hudson Valley, when I was a feature speaker at one of the group’s networking events:

Last fall, I attended Hudson River Housing’s Evening by the Hudson gala. The event was a perfect excuse to wear a brand new white Calvin Klein dress that had been hanging in my closet for just the right affair. I breezed into the cocktail reception with my husband, greeted some friends, fellow board members and the organization’s staff and then made my way to the bar area, where I took my place in line. When I finally got to the front I saw a tray of orange slices, lime and lemon wedges and maraschino cherries before me. The cherries looked irresistible, and the four-year-old deep inside of me couldn’t resist asking the bartender for one. After she gave me the green light, I grabbed the stem, leaned my head back and bit in, only to watch my husband’s expression morph from relaxed and ready to paint the town into oh-no-you-didn’t.

Yep, I did. I managed, in that impulsive moment, to spill cherry juice down my pristine white dress. Since our home was only 10 minutes away, we drove back for a super quick wardrobe change and a Spray ‘n Wash bonanza. We tossed the soaked and scrubbed item into the washing machine and scooted out the door. By the time the dinner started, we made our grand re-entrance, me in what I now affectionately call “dress #2.”

I laughed off the slip-up and went home that night, eager to see if I could save the dress. I scrubbed some more, washed and, nope, it was still there. I searched the Internet for anecdotes that included using a lemon, baking soda and a special brown soap. Nope, nope, nope. It was looking hopeless. I tossed the dress near a garbage can in the laundry room, reluctant to throw it away since I had paid a nice penny and only wore it for a whopping half-hour. Talk about a bummer!

Now, let me tell you the lesson I learned. What often feels like a mistake or a wrong turn can lead to an unexpected success. 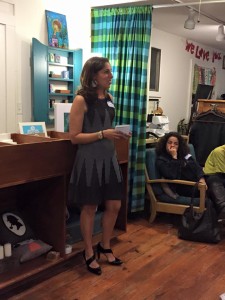 Do you see this picture of me, speaking before a group of women? This is the white dress. I know, I know… it doesn’t look white. It’s grey. You’re right about that.

You see, after I tossed the barely-ever-worn white dress by the trash and sighed, I came up with a modern day way to cope. I made light of my putz-like behavior on social media (a grand lesson on what not to do at a fancy party!) and asked my universe of friends if they had any ideas. Most were identical to all of the ones I had unsuccessfully tried. I still read on. One friend cracked a joke. She suggested I let my children dye it for a fun art project. Little did she know, she just gave me gold.

A day later, I went to an art supply store, gathered a Home Depot bucket we had in our garage, grabbed a long mop and flipped it handle side down and tried something I never had before. My husband served as my partner in crime, aiding me in this crazy adventure by timing, mixing and offering support as I attempted to dye the once-white dress. It was a long shot, but I had nothing to lose. Within a couple of hours, the dress was washed, dried and a brand new hue. Sure, I no longer had that white dress, but I had gained a sharp, new dress and one powerful lesson on the importance of being able to laugh at myself, call upon and listen to my inner circle and then – this is the important part – find a new direction, rather than staying stuck in defeat.

Similarly, when I first started my firm I had an idea of what things would look like and of how I’d fix the problems I encountered. Taking on work that was less than profitable? A (hard) lesson learned. Clients that were uncooperative? They helped us define what our ideal clients really looked like. Choosing a vendor or co-worker that wasn’t the right fit? We just kept moving forward. No one slip-up was the end of the world, as long as we were willing to listen, learn and, if need be, change course; every “oops” became an opportunity.